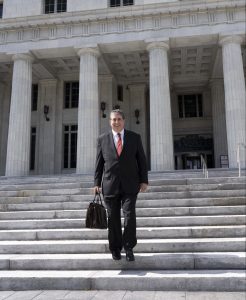 David Alschuler has been practicing law in the State of Florida since 1986. As a former Assistant State Attorney (prosecutor) from 1986 to 1991, David Alschuler practices in the substantive areas of criminal defense, criminal traffic defense and juvenile delinquency defense. As a former DCF Assistant District Legal Counsel (dependency and termination of parental rights prosecutor) from 2004 to 2006, David Alschuler also handles dependency and termination of parental rights case on behalf of parents who are accused of abusing, neglecting or abandoning their children and foster parents who are desirous of adopting the children in their temporary care and custody.

David Alschuler has tried cases in both state and federal court and has earned the respect of judges and lawyers.  As a solo practitioner, he treats his clients as family members, not as numbers.  He has received many awards and honors and has presented numerous continuing legal education lectures to other lawyers.

David Alschuler graduated from Vanderbilt University in 1982 and from the University of Florida College of Law in 1985.

Contact David Alschuler in regards to your criminal case (misdemeanors and felonies), criminal traffic case (such as DUI or DWLS), juvenile delinquency case or dependency/termination of parental rights case at 305-864-1301.